Plan of Towns, villages and important areas on the Costa del Sol. It is fair to call Málaga the capital of the Costa del Sol. The city offers shopping, entertainment and culture like any other big cities in Europe and it has managed to retain its original, Spanish charm with beautiful streets and restaurants where you can enjoy some of the specialties in Andalusia like paella, Serrano ham and wine.

Pablo Picasso, who was born here and peoples as Arabs and Romans who once ruled here, have left their signature on the architecture, culture and art in Málaga.

Just behind the main street Alameda Principal in an impressive building that was once a shipyard, is the popular market, so definitely worth a visit and a wonderful place to shop for food.

The port is also an attraction in itself, after extensive refurbishment a few years ago. It is both a peaceful place but also a vibrant place with museums, shops, restaurants and various events on regular bases. Málaga is easy to access from the airport, whether it is with the local train or by car. 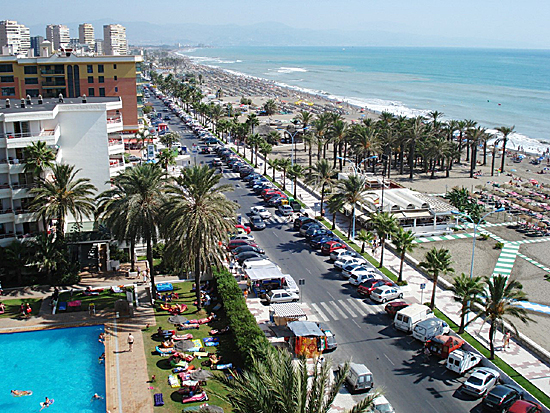 Torremolinos is one of the oldest travel destinations on the Costa del Sol and its reputation has not always been flattering but a lot has happened in recent years. The city is under continuous innovation and renovation and the centre is now only for pedestrians. Here you will find a wealth of shops, restaurants and bars and the centre square has events on regular bases.

The city has both a water park and a crocodile park and of course the sea, sand and beach promenade as far as the eye can see.

The city enjoys the privilege of being close to both Málaga and the airport and both can be accessed by the local train. 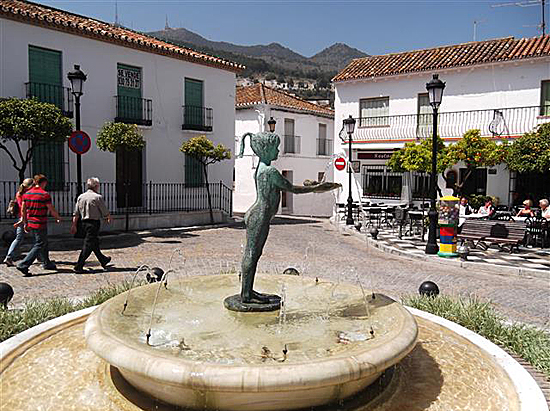 Benalmádena can be divided into three areas

A beautiful, typical Andalusian village with narrow streets and small old townhouses 280 m above sea level. There are many small, nice restaurants and spectacular views of the coast.

The central part of Benalmádena with lots of small restaurants and shops. In the middle of the city are Tivoli, that many years ago was started by a Dane. By the Tivoli are also the cable cars taking you to the top of the mountain, which offers a magnificent view of the sea and the coast and where one can attend the daily feeding of birds of prey in the eagle sanctuary. 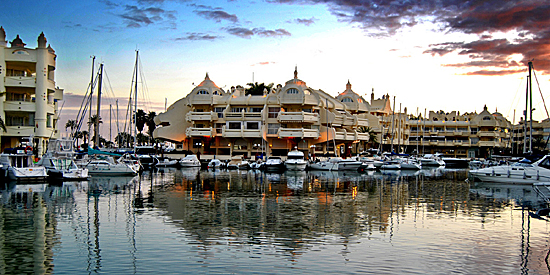 Located right by the coast and extends over some kilometres. Here you will find a casino, golf course and glorious sandy beaches, a vibrant place in the summer. Puerto Marina, the port which several times has been voted Europe's most beautiful, is probably icing on the cake giving you the feeling of "One Thousand and One Nights" or "Arabian Nights". 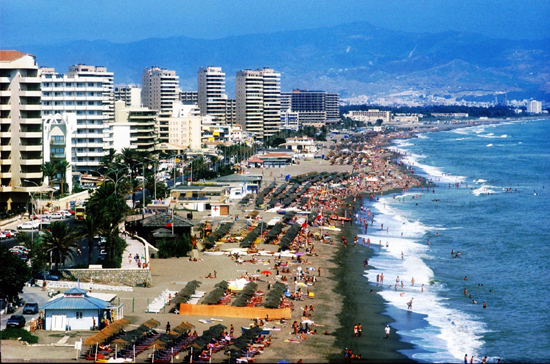 Fuengirola is as far as the local popular train goes from Málaga and is one of the most popular cities for Scandinavians. Here is everything your heart desires to maintain the modern lifestyle. In the centre of Fuengirola is the main square that twice a week is turned into a gigantic market and for the annual Summer Feria a complete town festival. The main attraction is probably the almost 10 km long beach promenade. Here you always find people walking, jogging and cycling and often there are activities on the beach such as volleyball, fitness and yoga. There is also ample opportunity to eat at the Chiringuitos (beach bars) where the smell of freshly smoked fish welcomes you.

Mijas Pueblo, a breath-taking mountain town about 5 km inland and up the mountain with the traditional whitewashed houses, cobbled streets, Arab courtyards and colourful flowers and pots hanging on the walls. Boasting an absolutely spectacular view of the Costa del Sol. 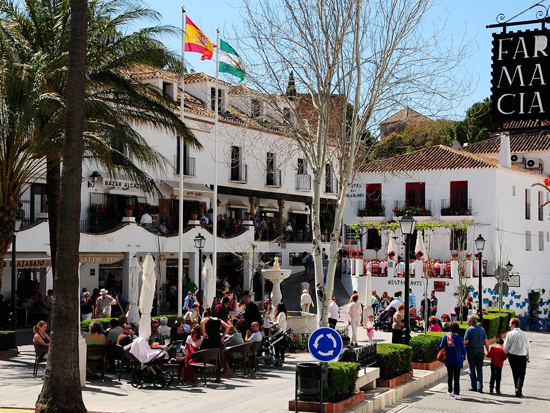 Mijas Costa covers approximately 7 miles of coastline and is a haven for golfers. Although it is not far from Mijas Pueblo life here, however, is more updated to the 21st century. 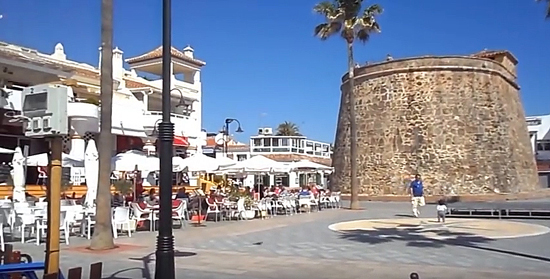 The small pleasant town of La Cala is located right by the beach and when you have finished your lunch at one of the many restaurants you can benefit from a relaxing walk on the newly built part of the promenade that is going to be approximately 100 miles long but for now goes as far as to Calahonda.

Calahonda has grown so successfully that you could consider it to be a town itself but in fact it is still a part of Mijas. The area is especially popular for golf lovers, as within a radius of 10 km there are 10 golf courses but if you not into golf here are tennis courts, fitness and the beaches with plenty of opportunities to enjoy all kinds of water sports. There is also a variety of culinary possibilities whether it's restaurants, cafes, bars or supermarkets. 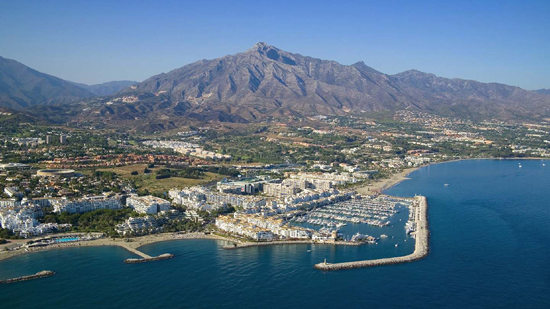 Views over Marbella and Puerto Banús with the Sierra Blanca mountain range and La Concha behind.

Marbella is the second biggest town in the Málaga province, after Málaga.

Marbella is subdivided in the following important areas and village of San Pedro de Alcántara.

From Calahonda to Marbella Town.

On the stretch, approx. 7,5 miles (12 Km.) several urbanizations, far too many to mention.

You will find 5 golf clubs, numerous beach bars/restaurants (Chiringuitos) along the beach, numerous restaurants of all ethnic origins.

Known for the best natural sandy beaches and protected dunes in Marbella. As well known for its pine tree forests.

Here are some of the major urbanizations

On the east side of Marbella, you find Cabopino with its own port, often missed out on because it is not visible from the road. The port has its very own Mediterranean style with good restaurants, bars and the beaches with natural dunes now protected by law.

Going towards Marbella you find Elviria. A very popular area, due to the sandy beaches, walking distances to several well-known 5-star hotels, Nikki Beach, the beach and the shopping centre. 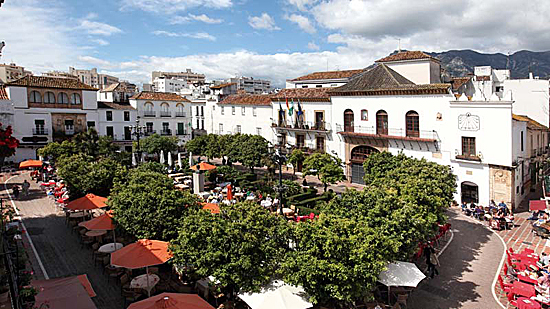 Was constructed during the '90s, a beach side community with a good mixture of villas, townhouses and apartments.

Part of the Los Monteros Complex, with the iconic Hotel Incosol and the famous Rio Real Golf Club. It has a number of complexes though on the land side of the A7/N340, still only a couple of hundred yards from the beach. Where you find the Rio Real Playa development, and El Trocadero Restaurant. 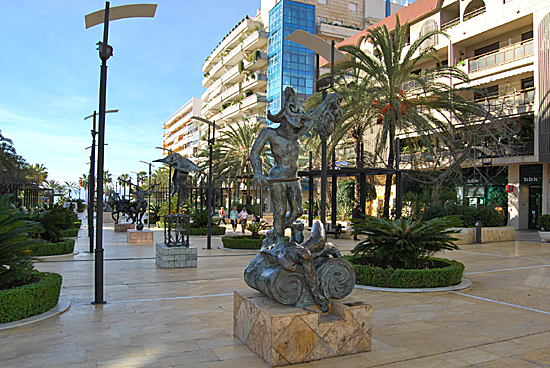 Avenida del Mar, with the Dalí statues, centre of Marbella.

Marbella has although it is an international city, a large local population and it is also the very favourite place for the rich and the famous. Here you have the sea, the beaches, the promenade and almost everything gastronomic. If you go to the old town, you have narrow streets, shops, galleries, bars and, not least, Plaza de Los Naranjos. And for the shoppers La Cañada shopping centre, with its multitude of fashion brand shops and a large supermarket, Alcampo.

Within the town boarder and close surroundings, we have the following urbanizations and areas:

The Golden Mile is the stretch from "El Pirulí", The Copper Tower, to Puerto Banús. Holding some of the old urbanizations of Marbella, where the Germans started developing in the late ’60s with the star hotels, Marbella Club Hotel and Puente Romano, and of course the multi-million villas on the beach.

One of the old urbanizations where many villas are being reformed or totally rebuilt in contemporary style.

Two neighbouring luxury areas, with mainly villas, but as well apartments and townhouses.

A very large development, with a multi-national clientele coming from all over the world.

From Marbella Town to the river, Rio Guadalmansa along the Benahavis road. 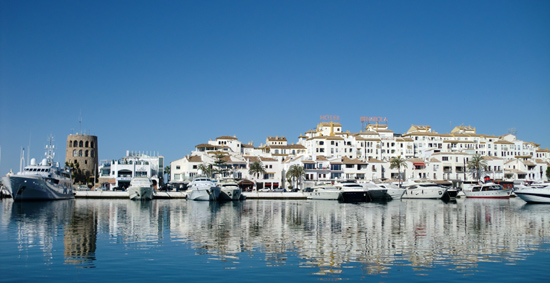 Puerto Banús is where you wonder around dreaming that you are on one of the huge yachts in the harbour, look at the exclusive cars slowly driving by or carelessly parked and it is not unusual that you spot a popstar or a reality star. The rich and the famous come her for the beaches, the clubs and the nightlife. 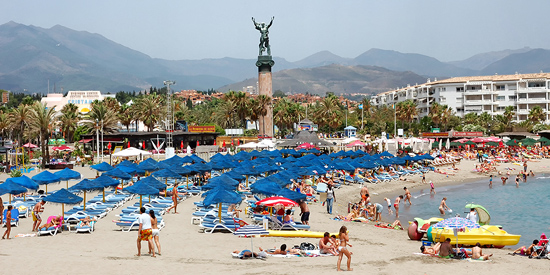 On the mountain side of the A7/N340 one of the biggest urbanizations in Marbella is situated. Very popular due to the proximity to Puerto Banús. With every type of property represented from small apartments to multi-million front line golf villas. And of course, the very well-known golf courses!

At the foot of the beautiful Sierra de Ronda mountains you find this town with narrow streets, lots of shops, cafés and bars and not least the graceful church on Plaza de la Iglesia. The city is refreshingly unspoiled placed amidst Puerto Banús, Marbella and Estepona.

A very popular luxurious urbanization, specially Baja, on the beach, with its villas owned by famous people. Alta on the Mountain side of the coastal road, has a number of villas apartments and townhouses, but it’s the 3 golf courses of Guadalmina Golf drawing the attention, because everything is built around the green area, stretching on both sides of Baja from the beach half way up to the toll motorway and Valle del Sol. 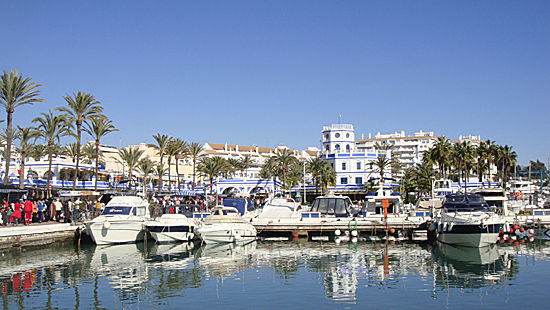 Estepona is a quite big and very typical Andalusian town on the coast that has managed to retain its charm and atmosphere of an old fishing village. The streets are so narrow that they are better suited for horses than cars and here are a lot of tapas bars serving traditional Spanish specialties. The town benefits from approximately 325 days of sunshine every year and an average temperature of about 18 degrees because the mountains protect against the cold from the north. Because of the weather, Disneyland was once supposed to lie here but the choice fell, as we all know on Paris. 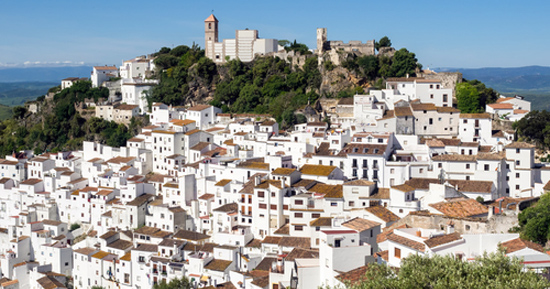 Casares is a picture postcard worthy. This white town is beautiful in itself but the view from here is phenomenal over the Mediterranean, Gibraltar and across to Africa. Here are two renowned golf courses and soon the first Crystal Lagoon in Europe is a reality here. 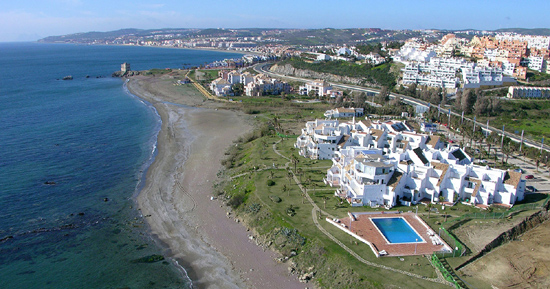 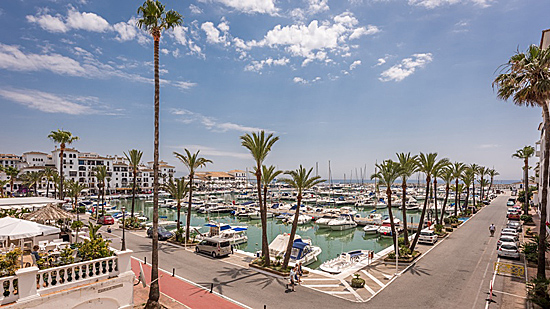 Besides an 18-hole championship golf course Duquesa is probably best known for its beautiful harbour. Here you can make use of the full harbour service or rent Jet Skis, Wakeboards or go scuba diving. On both sides of the harbour there are wide sandy beaches. 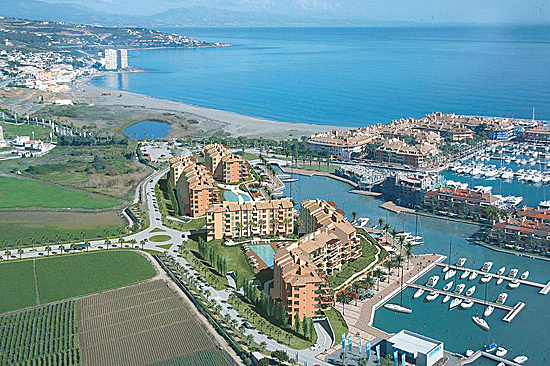 Sotogrande is one of the most luxurious residential areas on the coast. Some of the richest and most powerful families have holiday homes here. Sotogrande is especially known for its five golf courses where Valderrama Golf has hosted both the Volvo Masters and Ryder Cup. Here is golf academy, tennis, rugby, horse racing and 6 world-famous polo fields. Sotogrande marina is definitely worth a visit and offers water taxi service in the summer to other Costa del Sol towns.